A Public Interview with Haruki Murakami in Kyoto

I saw Haruki Murakami in one of his rare public appearances in Kyoto, Japan. I was fortunate enough to get one of five hundred tickets. 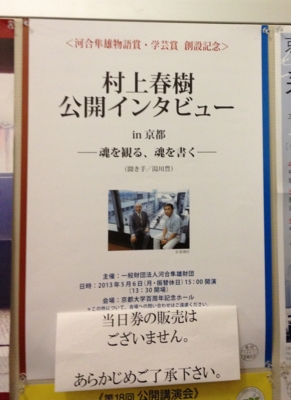 My impression of Murakami

The audience could see his carefree smile every minute. Murakami told many jokes and made us laugh constantly. On the other hand, he also looked sharp. He is famous for his diligently exercising every afternoon after spending the morning writing. I got the impression that it was not only his training, but his many severe critics that made him sharp.

His comments on why he doesn't appear in public

At first, he said, "Hello, I am Murakami. This may be the first meeting between almost all of you and me, so let me tell you the reason why I'm not in the public eye. This is because I lead an ordinary life. I enjoy hunting for books and vinyls in secondhand stores. If someone asks me, "Are you Murakami?", it makes me embarrassed. I would appreciate if you would treat me like an endangered animal. Be careful, if you approach me or say something to me, I might bite you."

This first speech changed the atmosphere of the room. At first, people expressed a nervous like reverence for one of the world's most famous novelists. After this speech however, people became more relaxed and we could simply sit and listen to this funny guy talk.

The Depth of his Works

Me: When he told us this, I recalled the episode, "Going down a well", in "Twisted Bird Chronicle"


The transition of his way of writing

Murakami: I wrote my first two long novels and an anthology of short narratives, "Slow Boat to China", when I was a manager of my own jazz bar. There was not enough time to write and I didn't know how to write novels. Therefore, I made written collages of aphorisms and rags. Then, I read Ryu Murakami*'s "Coin Locker Babies", and wanted to write novels like that. I closed my own jazz bar so I could be a man who can write novels as I like. I was pleased about that. This pleasure was connected to the pleasure of writing. After making "collages of aphorisms", I would take up "storytelling" as a way of writing.

*Japanese popular novelist who is of a similar age to Haruki Murakami and is his friend.

Murakami: My first novel on storytelling was "Wild Sheep Chase". The next work "The World's End and the Hardboiled Wonderland", was a mid-long novel, first published in a novel magazine. It didn't have a power to catch readers' hearts, so I connected it with other narratives and rewrote it. It was a way of, "dividing myself". I never made any plan before writing, however I succeeded. I enjoyed writing these two novels with excitement ,"what happen on the next page?

Until that, I was on my second step "OK, so if narratives are narratives, no need for additional values". My third step began from, "Twisted Bird Chronicle". "The World's End", consists of two narratives. On the third step, I wanted to divide narratives into more than two parts. However, I wrote, "Twisted Bird Chronicle" in the first person. It was difficult to write a divided story in the first person. Therefore, many factors were in the novel: memories, letters and dairy entries. They constructed a multi-layered world."

Me: I convinced with his saying. His works is evolving gradually. Before and after this interview, I think that "The World's End and the Hardboiled Wonderland" and "Twisted Bird Chronicle" is the most important milestone of him because the depth of these two novels was obviously deeper and newer than the former novels.

Me: I was surprised while reading an interview with Oliver Sacks*. He said, "Narratives are critical to human identifying" He is a well-known professor of neurology and psychiatry, therefore he analyzed the importance of narratives scientifically. This approach is different from Murakami's, however the conclusion is the same. It is intriguing.


About his other novels

Murakami: "Moving through a wall" in "Twisted Bird Chronicle" isn't a metaphor. I experienced this. All things in my novels are real for me. Some western critics said that Garcia Marquez's novels are magic realism. However, I believe that Marquez must have experienced everything in his novels.

The interviewer: Do you think that in the 20th century narratives' power wasn't appreciated by novelists and critics in the 19th century?

Murakami: Yes, I think so. I have read "The Brothers Karamazov" four times and "War and Peace" three times. These experiences mean that I was soaked in 19th century narratives. However, in the 20th century, especially from the 1950s to 1970s, narrative literatures were discriminated against.

The interviewer: In those days, people appreciated novels like "What is a human being?" (wry grin)
Murakami: (wry grin) In the 1980s, in narrative literature, John Irving's "The World According to Garp", suddenly appeared. The novel was unique in those days. I (as a narrative story writer) was also criticized frequently in the same age, however I could stand it thanks to my readers.

Me: Actually, the top novels on my want-to-read-novel list are Marquez's "One Hundred Years of Solitude" and Dostoyevsky's "Demons". I was surprised and now want to read these novels even more.


About the other novels

Murakami: I never cry after reading my books. An exception however, was "Underground". I had an interview with a twenty-something year old wife of a victim of the Tokyo Subway Sarin incident*. During the interview, the atmosphere seemed bright for these three hours, I didn't feel dark. Then, in the train on my way home, I couldn't stop crying for an hour. This feeling sometimes emerges while I write my novels.
*In 1995, a cult group released poisoned gas in Tokyo's underground and 13 people died, while 6,300 people were damaged.

Murakami: I always write my novels with music (I don't listened to the music seriously.) Music seems to encourage me. While working, I play only LPs not CDs, because of LPs are hi-fi.

Q: What beer do you think the best?

Murakami: Of course it is the beer you drink when you are dying of thirst! Anyway, lately, my favorite is, lately, Maui Brewing of Hawaii's Big Swell. I favor bottled beer over canned beer, but this beer is never served in a bottle. On these beer cans, maker prints a detailed explanation for this policy: Canned beer is better than bottled beer. This beer is very good.

Murakami: I have read all my novels that were translated into English. Reading my novels is enjoyable because I forget almost all the content in them.

What kind of novel can be translated easily? They are novels that have strong power in their narratives and make readers' mind progress further and further. On the other hand, I feel its difficult to translate novels that have are delicately described. For instance, The Great Gatsby.

I don't meet people spontaneously, but my novel's translators are an exception. I do meet them spontaneously. When I translate foreign novels, I ask about them their works in relation to the original authors. Generally, they answer my questions kindly. I appreciate their kind attitudes, so I do as the same for the translators of my novels.

At the last moment of this public interview, He said:

Murakami: My last message is… I am really glad for the people who wait and purchase my new book. The value of them is greater than any critic and any number of sales of my books. Sometimes, some readers say, "Your new book is terribly dull, I'm disappointed with it, but I will buy your next one." I love these people. I never want you to love all my books. I don't mind that you dislike my books.

I write my novels personally, desperately and non-negligently. When I write my novels, I think about my novels only, and never do other works. If you appreciate that Murakami does his work enthusiastically, I'm thankful to you. I have little confidence, but I'm serious about my work.


Me: I think that this message shows his gratitude to his readers and gives encouraging words for all serious workers. Throughout this interview, I realized that Murakami is a serious professional through his serious and enthusiastic lecture.

When I left the auditorium of Kyoto University, the place where his interview was held, I saw a beautiful twilight sky. At the beginning of this interview, Murakami said, "I hope you will relax and enjoy this spring afternoon in Kyoto." I remembered this phrase, and then realized that the best spring afternoon in Kyoto of my life, was over right now. 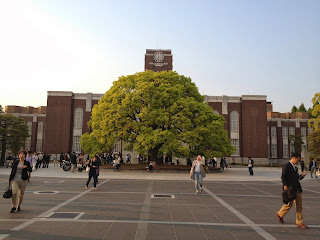