How do Japanese think about the Pearl Harbor attack?

"Do you know what day the 8th of December is?" If you ask Japanese people, some music lovers will reply "It is the day of John Lennon was shot." But most of them will reply "It is the day (Japan Time) of the Pearl Harbor attack / the beginning day of the Pacific War." All Japanese know of the Pearl Harbor attack, most of them have a different understanding from the one U.S. people have. 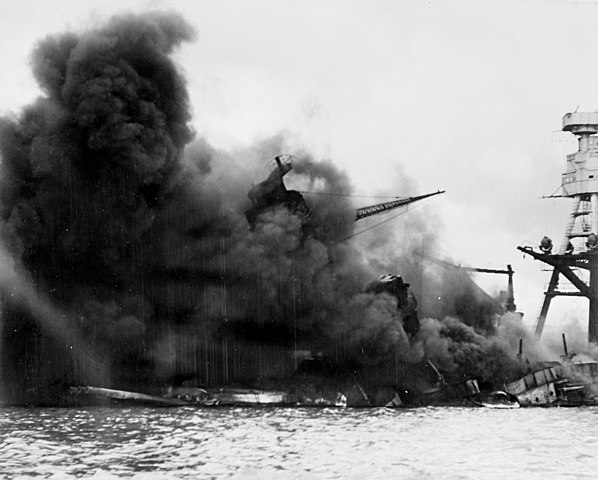 The USS Arizona (BB-39) burning after the Japanese attack on Pearl Harbor, 7 December 1941 (from Wikipedia Commons, this image is in the public domain.)

First, quite a few Japanese believe in the opinion that "the U.S. knew of the attack beforehand." The opinion is as follows: The U.S. caught and decoded the Japanese army's coded command of the attack, therefore the U.S. army prepared for the attack: let all main aircraft carriers go, only old battleships were left in the harbor. The opinion also says that a rare vivid color film which captured the attack exists. It is the evidence of the opinion, they said. In addition to, some go to the length of saying that it was a trap by the U.S. Of course, all the information above is a false rumor. But in Japan, many people know and believe the rumor.

Second, some Japanese say that the Japanese government prepared the declaration of war, but it couldn't be sent to the U.S. government before the attack. The night before the attack, all members of the Japanese Embassy in the U.S. attended a farewell party for a member and the ambassador attended a funeral, therefore nobody could receive the declaration. The ministry of foreign affairs of Japan admitted this mistake at last in 1994.

It is absurd thinking, I admit. However, in my opinion, many Japanese think so. Actually, I did. Through writing this article, I have learned that the rumor that the U.S knew of the attack beforehand was false, learned over 2,400 U.S. people were killed at the attack (many Japanese think the attack broke many battleships but didn't take people's lives.) I have also learned the following fact: think about what we did.

EDIT: the related post - Why did Japan attack Pearl Harbor?

-How do Japanese think about the Pacific War?
-The Great Tokyo Air Raid - More Victims than the Nagasaki Atomic Bomb
-Which was the best era in Japan? An interview with my grandparents who were born in the early 20th century
Posted by Yoshiteru at 12/08/2007

So why did they attack? I've heard it suggested that they didn't want Hawaii interfering with plans for the Pacific, but the US and Japan were still negotiating at the time, so why the preemptive strike?I do remember reading about the US opening the Japanese ports in 1850, but that was a long time before WWII.

Thanks for your comment. Actually, I don't know the reason why Japan decided to attack the US suddenly in detail. I'm going to check relevant books and make new entry about this topic.

Ms./Mr.Anonymous,
I wrote my opinion for your question: See http://yositeru.blogspot.com/2008/06/why-did-japan-attack-pearl-harbor.html

Thank you very much for your question, I had a good experience to reconsider my country's history.

I am quite impressed at you honesty. I have lived in Japan 7 years and have acted in many dramas and movies about post war including "ashita e no yuigon" with the late Fujita Makoto san. I was a bit offended at the defense of a war criminal. his defense seemed weak to me. He murdered or executed American prisoners of war without a proper trial (which he himself received).

Thank you for your comment and introduction of interesting movie. I haven't seen the movie "Ashita e no Yuigon", but I'm interested in it very much after checking its plot with Wikipedia.
http://en.wikipedia.org/wiki/Best_Wishes_for_Tomorrow

Wikipedia also tells that the movie is admitted by both "leftish" newspaper and "rightish" newspaper. It is rare for Japan's 20th-Century-war movie.

In my opinion, as far as reading the short plot of Wikipedia, Japan's execution to US soldiers was unfair because it wasn't by the rules. Anyway, I'm gonna watch this movie (I found it at iTunes Store).

The japanese wer just too evil to slaughter lots of innocent people on earth, and still shamelessly refuse to admit that fact.

Unfortunately, as for some Japanese people, it is true, However, it isn't true for other Japanese, I believe.

Thank you for the insight! I am a bit of a WWII enthusiast, and I was always curious to know how the 'other guys' society viewed that day in retrospect.

What we, the U.S, did was far worse in my opinion. We dropped weapons of mass destruction on two cities. Killing thousands of INNOCENT people. I'm not saying the pearl harbor attack was a good thing, but what we did was far worse.

For 5/27 comment: Thank you.I think that we never make this incident fade away.


For 7/15 comment: I appreciate your opinion because you think about this incident not only on American people side but also on Japanese people side. Like you, I would like to think this incident on both side.

I am surprised people don't know why Japan attacked. We cut off their oil, threatening to render their entire fleet immobilized. Japan had a huge navy, so had other nations cut them off.

Also, the reason for the US dropping the bombs was that we knew Japan would never give up. They would never surrender, its in their blood. They estimated the death tole it would cost to invade Japan and thought it was to high of a cost.

The bombs were as much of a scare tactic as a weapon. The US was telling Japan... "We don't have to risk our men's lives to destroy you"

Faced with this discovery, Japan surrendered instead of facing complete destruction.

Japan's attack on Pearl Harbor was strategic and smart. They wanted to own the waters, and with most of the US fleet in Hawaii, placed close to our enemies, they struck first, knowing it was their best chance of survival.

Japan had zero allies around them, Russia was tapping on the back door, china has always been a problem for them (as well as the other way around). Japan is a small island, and relies heavily on trade and fishing. US was blocking both whenever they could, fearing the growing strength of the "empire of japan"

Pearl harbor happened on the 7th of Dec. Not the 8th. I'm surprised no one has mentioned that.

Dear Eric, thank you for your comment. Yes, Pearl Harbor happened on the 7th of Dec, the US Time but on the 8th in Japan Time Zone. So all Japanese people know that the day of Pearl Harbor was the 8th of Dec.

I've always enjoyed researching American history, and World War II specifically. It's only been researching the "other side" of this particular story. Thank you for taking the time to put this together.

Thank you, DK.
You make an important point.
I will research Japan's war declarations at the beginning of the Pacific War.

Thank you for your comment. I added the related post on this article; Why did Japan attack Pearl Harbor?

I hope there would be less war, so everyone could enjoy peace.

Grandfather was in the war. We dropped the bomb to end a war and save lives. Over 100,000 Americans and 1million Japanese dead at the time.Don't start a fight you can't win.

Jimmy, you are true. We never start a war we can't win.

Ms. Tiffany, I strongly hope peace, as you wrote.

Thank you Mr. Greybeard, I appreciate you finding and reading this post.

Unfortunately, in 2019, it seems that many Japanese people still don't know the details (for example, the number of victims) of the Pearl Harbor attack compared to Hiroshima and Nagasaki. I think that we Japanese have to learn the history of the war from the viewpoints of Americans, Chinese, Koreans and the other citizens involved WWII.