Why is Japan's unemployment rate so low?

Japan's unemployment rate and the recession

Japan's unemployment rate is lower than other developed countries.

People say that Japan has been experiencing a long recession, called "the lost twenty years", since 1992. If in a recession, then why is Japan's unemployment rate so low?

The reason why, has a strong relationship to the following chart. 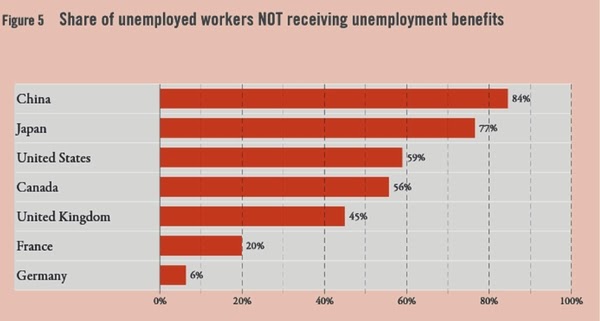 Considering the bad conditions for those seeking unemployment benefits in Japan, many job seekers have no choice but to apply for a company which has bad (sometimes illegal) work conditions.


My opinion: The Reasons why Japanese society doesn't like to help unemployed people

Many young people, who feel the harsh reality of employment, never participate in elections. In the election for the lower diet of Japan in 2012, the ratio of people voting in their twenties was 37.89%. For voters in their seventies, the ratio was 74.93%.

Japanese people in older generations – in my opinion, over about 60 years old － have tendencies to think "If a young person is in good health and yet unemployment, he or she is idle. Why do we have to pay our tax for such lazy people?" They spent their youth in the 60s to 80s. At that time, Japanese society kept the unemployment rate at 2%, while in European countries the unemplyment rate was 10%. That generation of Japanese citizens could get jobs easily. I got my job in 1993 (the first year of Japan's "lost twenty years"), after 6 job interviews for the same company. Three people, including me, got a job in my company out of 300 applicants from my university. After starting my job, an older co-worker in my office said; "I can't understand why my company is now "the narrow gate". He said he found it easy to get his job, "I only found a recruitment ad in a newspaper, applied, got this job. Maybe almost all of the applicants at that time could get jobs."

However, people from older generation have experienced other harsh realities. In their youth, Saturday wasn't a holiday. The words and concepts, "abuse of power" and "sexual harassment", didn't exist. More than in modern Japan, older people had absolute power – if a boss said something irrational, young people couldn't object, and had to simply obey him. Now such harsh realities have gone and people work under more favorable conditions. Therefore, people from older generations often think, "modern young people work in such favorable conditions, but they can't get jobs. They must be lazy."

My opinion about Japan's low unemployment rate can be explained through the following example. Miki Watanabe is the founder of a big pub-chain company. The company is notorious for its bad labor conditions. For example, their corporate identity is: "Work 24hours a day, 365days a year, till you die." A worker of this company committed suicide. Her work condition were: 140 hours overwork per month. On her designated "holidays", the company forced her to receive training from 7am, do "volunteer activities" and write a report about the "volunteer activities".

Watanabe, despite being such a notorious executive, was surprisingly elected for the upper diet in Japan. Among people in my generation (under 40 years of age), it was unbelievable. Many people from older generations feel the same way. However, some people from older generations wanted Watanabe to be in power. They thought modern Japanese society needed a severe leader, who says, "Work hard, don't be a spoiled child". In the end, 1 million voters voted for Watanabe, showing support of this work ethic. Clearly, older generations who supported Watanabe participated in the election, however younger people who were against Watanabe did not.

Japan's low unemployment rate compared to other developed countries', never means Japan's economy is in good condition. It means there is a big generation gap in understanding the real possibility of getting jobs in modern Japan and about their voting rates.
Posted by Yoshiteru at 4/14/2014

I remember about the dole aka unemployment benefit in Hong Kong during the British times, my dad spent a few months on it and had to reapply every few months, now fast forward to post 1997 the dole in Hong Kong is even harder to get

Thanks for your information. Yes, the chart I quoted above says that it is hard to get unemployment benefit in China...

Every month? That's so hard... I remember again the chart I quoted on this article.

In Hong Kong the work environment is very demanding, my mum used to work at the Mass Transit Railway, her boss who invented the octopus card always demanded her do A and B in one go and that made her come home around 11:00 pm or at worst 12:30 am and if she misses the train, she catches a taxi home, that's Hong Kong work style no one comes home on time and the taxi in Hong Kong is way more expensive than the taxis in Japan

I'd say Hong Kong is basically economic sweatshop which thrives on economic slavery, my cousin who is 9 days younger than me works as a chef at the hotel just above the Kowloon Airport Express Station, my cousin starts 6:00 am and finishes pretty anywhere between 11 pm or 12 am, by the time he comes home it close to 2 am because he lives in the New Territories where all transport do not operate after 12:00 am, by the time he comes home, he is not only exhausted, he has only 6-7 hours sleep because his shifts are set on very weird times during the week, the reason he works as a chef is because my uncle who is a ex police officer does not want my cousin staying at home and he is heavily in debt, Hong Kong looks good on the outside but inside its a different story when you have family members who live in Hong Kong

I feel sorry for your cousin. Also in Japan, such terrible work conditions prevail among the chain restaurant industry.

Yoshiteru, you might find this photos from a New York Newspaper on living conditions in Hong Kong, Kowloon is notorious for having squashed quarters:

Mr. Alex, I am sorry for my late reply.

The photos that you shared described a serious problem of many city dwellers. In fact, I have lived in such a room in my 20s!