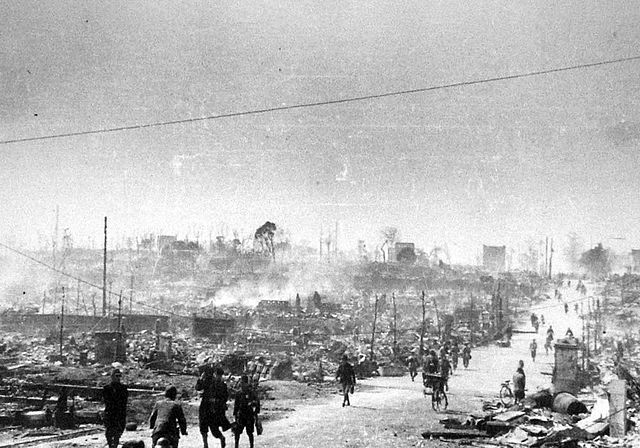 
On the day following my business trip to Tokyo, I visited The Center of the Tokyo Raids and War Damage. I learned the following.

The scale of the Great Tokyo Air Raid

According to the contents of The Center, the US carried out its bombing raids on 120 of Japanese cities. The death tolls were 410,000 including atomic bombs / 200,000 excluding atomic bombs / 100,000 in one night of the Great Tokyo Air Raid, on March 10, 1945. That means the amount of the victims of the Great Tokyo Air Raid accounted for a half of all victims of normal bomb air raids in Japan.

The contents of the Center 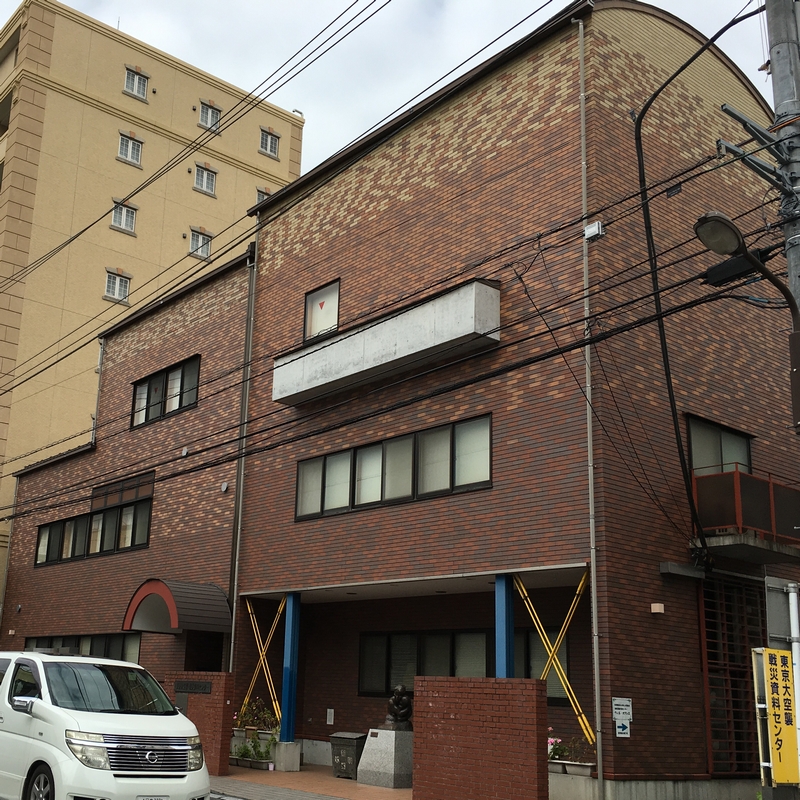 Many photos are displayed in the Center. The most shocking ones were as follows; (from Wikipedia Commons public domains)

- goods for air defence among regidents
- burned cap of a baby
- melted dishes sticking a roof tile
- a miniature of a room of standard home at that time
- leaflets of the US airborne propaganda (The Japanese government prohibited to pick such leaflets out, however, some of them remain. The contents of them were interesting. They were well-informed about Japan and Japanese history but too logical for Japanese people, I think. I think that Japanese people have tendencies to feel strongly logical explanations as offensive pursuits.) ( To be clear, personally I love logical explanations.)
- Things related children education, for example textbooks, magazines and posters. You can see a big change at the end of the war.
- many others

At a small video booth, I watched the TV program about the Air Raids, which was broadcast by NHK (Japan's public station) in 1978/

The TV crew visited the mansion of Curtis Emerson LeMay, who was the planner and the commander of the Great Tokyo Air Raids. When I saw the scene, I remember the movie "13 days" describing the 1962 Cuban Crisis. In the movie, LeMay (of course an actor played as him) appeared as the top of the US Air Force. I presumed that one of the reasons why he got to the top was the success of the Tokyo Raids. (By the way, LeMay insisted on the air raids to Cuba at the Cuban Crisis. If President Kennedy accepted LeMay's argument, WWIII would have broke out, I think.)

LeMay said to TV crew of NHK, "I have nothing to say for Japanese reporters","No interviews" and "You may film my medals."A glass cabinet appeared. It is the showcase of his many medals. One of them is the one from the Japanese government in 1964. Why did the government give the medal to the man who commanded the massacre its citizens? The reason why was his cooperation to build Japan Air Self-Defense Force.

After watching the program, I checked this award out. When the government decided on the award, many diet members and citizens, including victims of the Air Raid, were against that. The Prime Minister Eisaku Sato (Liberal Democratic Party) gave an account to them, "Now, Japan has a friendly relationship with the US. If a US person earned an achievement, it is natural to reward for that, in spite of the past." I think that this incident is one of the symbols of the LDP's policy of "subservience to the US".

cf. Related Post; Why is the US military in Japan?

Meanwhile, the Showa Emperor didn't give the medal to LeMay directly, despite in the ordinary course of decoration events the Emperor gave medals directly to receivers.

The couse of the damage spreading

After learning above in the Center, I looked over the fire protection policy at the time of WWII as follows;

-In 1937, the Japanese government released the Guideline of Air Defense. It contained the principle "In the event of an air raid, never evacuate except for old people, children and sick people.
-In 1941, The Air Defense Law released, including "prohibit to evacuate" and "duty to fire extinguishing" This law was never changed till the end of the war.
-After the Great Tokyo Air Raid, newspapers said, "Never Run, Guard", "Protect Our Homeland"

Why did the government release such a policy? Was it better a policy of evacuation in order to keep soldier power and labor power than the "non-evacuation" policy? The committee of The Air Defense Law answered on Nov. 20, 1941, "The damage won't be massive. We have to be more afraid of confusion among citizen and corruption of people's will to accomplish the war than the real damage."

The leader of the Great Tokyo Air Raid was the US Air Force. Therefore, the US Air Force at that time had direct responsibility for the Air Raid. However, the Japanese Government also had a big responsibility because of its decision to provoke war with the US and its policy not to protect its citizens' lives. I, as a Japanese citizen, must bear watching the current Japanese Government intending to do some of the same actions.

It is annoying when people in China always being informed that they suffered during the WW2 while they overlooked the sufferings that the Japanese also had to endure during the war. I personally think that Chinese medias and Chinese historical education are way too biased when they are talking about the WW2, which I really hate. I really hate Chinese medias and Chinese historical education because they are too biased and not objective, Communist Party of China's propaganda also made everything worse. Chinese should also pay more sympathy to the Japanese war victims instead of thinking that they are the only victim.

And then as a Chinese, I would like to tell you that although I dislike the Communist Party of China's biases about the WW2 but on the same time I also dislike the Japanese politicians denials regarding the war crimes that the Japanese military did at China and the other Asian countries.

Thank you for your comment. I appreciate your objective and open-minded thoughts about the war victims in Japan and China. I respect your attitude.

Some Japanese media also too biased about the war crimes of Japan. They say "The Pacific War wasn't an invasion, but an emancipation for Asian countries." I never agree with such opinions.

You wrote about the Japanese politicians' low attention to Chinese people and the other Asians regarding the war crimes. I accept your message as sincere advice. On that basis, I would like to read your opinion about the Statement by the Japanese Prime Minister Shinzo Abe on the 70th anniversary of the end of the war.
http://japan.kantei.go.jp/97_abe/statement/201508/0814statement.html

I think that this statement admits Japan's war crime. I think that some of Abe's thoughts and actions regarding the war crimes are inadequate (ex. praying for Yasukuni Shrine) and I am not his supporter. However, I would like to expect you and other people in Asia to understand that the official message of the Japanese Government contains Japan's expression the feelings of deep remorse and heartfelt apology or its actions during the war.

Of course I really admit some of Japanese politicians' thoughts, opinions and actions about the war crime are inadequate. Therefore I agree with your comment "Japanese politicians could pay more attention to Chinese people and the other Asians in regards to the war crimes, so Japan's relationship with the other Asian countries also would be better."

Thank you so much for your response in regards to the war crimes and the WW2, I appreciate it.

If both Japanese and Chinese could be objective and sympathetic with each other when facing the WW2 issues, then I think that Japan and China could have better relationship in the near future.

On the same time, I also would like to tell back to my friends and my family members back in China about your posting. So, they could at least understand your viewpoint and be less anti-Japan.

Have a nice day.

Thank you for your message.

I also wish that peace will prevail between Japan, China and all other countries on the earth.

I hope that the both the Japanese and Chinese governments deal with the issue objectively and calmly.

Thank you. I totally agree with you. And I hope you and people of your country live in peace and are respected as individuals.