Which was the best era in Japan? An interview with my grandparents who were born in the early 20th century

(Interviewing them and writing this article in May 2001, adding pictures in 2016) 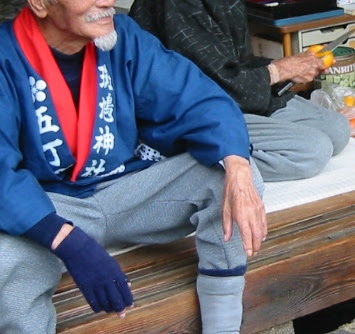 My grandparents on the day of their town's traditional festival

My grandparents will be 90 years old soon, three times my age. I wanted to know how the world they have seen has changed, so I interviewed them. (cooperating in creating questions by a friend of mine Mr.Kinami)

Profile of my grandparents

Born in 1911. He worked for Japanese National Railways, and was in charge of the planning office of the Osaka Administrative Bureau of Railways, etc.
He enjoys playing music. He plays the violin, trombone, and shamisen (Japanese guitar). He also likes collecting coins and stamps, and gardening. He is a heavy smoker, and a coffee-drinker. But amazingly, he is very healthy, he even smokes the strongest nicotine cigarettes. 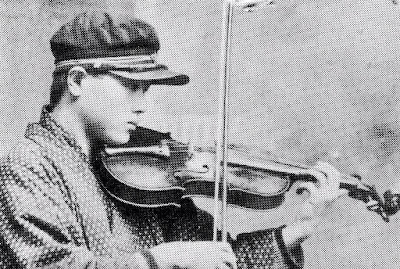 Born in 1912. After graduating elementary school, she was put to work. After getting married, she brought up one girl and four boys. She likes reading novels and gardening.


Interview Part 1: About the public at large

Q: In your opinion, which was the best era in Japan? : Before the war*, soon after the war, "high growth of the Japanese economy" era**, "bubble" era***, and the present.

Q: Do you feel that there has been a moral degeneration in Japanese society? They say there is a marked decline in public morality, On the other hand, some other people say that we have embraced the process of reducing discrimination, etc.

A:(Grandfather) I think it is getting better. I feel that we are in the process of reducing some discrimination.
(Grandmother) On a superficial level, I think the present society is the best. There are many problems in society, but I don’t think that juvenile delinquency has increase as they say on the news.

Q: What has changed the most in the world?

A:(Grandfather) Cars have changed the world very much. But I think that motorization is the subject of discussion. First, it isn't effective that people use a car when they don’t really need to. People don’t realize problems (traffic jam, traffic accident, etc.) of using car. People should use public transportation. Second, They have caused a lot of environmental pollution. At least, diesel cars must be banned.
(Grandmother) When water pipes were laid, I felt it was very convenient. And I will never forget the way I felt when we bought a TV set and a washing machine.

Interview Part 2: About the war and Hirohito, the emperor

Q: What did you think when the Pacific War started?

A: (Grandfather) I thought that it was a very serious thing, but I wasn’t surprised, because the Manchuria Incident, etc. had already broken out and had escalated into the Pacific War. Therefore I didn’t feel that the Pacific War broke out suddenly.

Q: How did you feel when the war was over?

A: (Grandfather) I only felt that I had escaped death.
(Grandmother) I gave a sigh of relief.

Q: In your opinion, did you think Japan could win the war?

A: (Grandfather) I thought Japan couldn’t win against the U.S. After many air raids, when I saw Kobe city from the second floor of a building in Osaka* I felt it was the end of the battle.
* It is 30km (20miles) from Osaka to Kobe. Osaka has many tall buildings, so normally you cannot see Kobe even from the tenth floor of a building.

Osaka station after the 1945 air raid (quote from Wikipedia Commons)

*The top of Japanese Army. It released untrue news of Japan’s victories in the war despite their continual defeats during the second half of the war. Even now, Japanese use the word “the Imperial Headquarters’ releases" when companies, or the government releases untrue public announcements.

Q: When people were called into the army, was it really an honor for them?

A: (Both of grandfather and grandmother) In our opinion, nobody was happy to be called up, instead this usually meant their call to death yet it was honorable. However, men who couldn’t pass the standard and were not called up because of their physique were ashamed.
*People in Japan had a wartime custom in which they celebrated the man who was called into the army.

Q: Why did people accept the U.S. Occupation Army without rebelling soon after the war, even though the Japanese government had said, “The U.S. and the U.K. are the evil ogre and the beast" during the war?

A: (Grandfather) My co-workers and I discussed how Japanese National Railways welcomed the Occupation Army at a conference when they landed at the port of Wakayama (next to Southern Osaka). One of the reception members said, “I will attempt to wreck the train the Army members ride!" Of course his proposal was rejected, but he remained a member of the reception. Surprisingly, he later said, “The U.S. Army is great. They are gentlemen." when he was back from the reception.
I hadn’t heard what had happened in detail at the reception, but, in my opinion, the first members of the Occupation Army were picked based on their previous knowledge of Japanese people and culture. I didn’t hear any bad news about them during the occupation era. And I think that it was brilliant that the Army was very plentiful when the Japanese has no material things. It made it easy for the Japanese to open their hearts to the Army.
But, on the other hand, I think that the Japanese people surely feared the Army. When I went to a station to welcome the Army, there were no Japanese people near the station. Maybe they stayed in their homes all day long. However, three days after the arrival of the Army, I saw almost all the GIs accompanied by Japanese women in a train.
(Grandmother) They say, “When the Army comes, women never go out" very often.

Q: Did you think the Showa Emperor (Hirohito) was a God*?

A: (Grandfather and Grandmother) We didn’t think that the emperor was a transcendent human or the descendant of God. But we thought the Showa Emperor was an excellent man, so, we thought most Japanese people respected him at that time. Or else riot would break out.
*The Japanese government stated and educated pupils that the emperor was the descendant of God. But soon after the war (in 1946), the Emperor himself declared that he was a mere human.

Q: After the war, did you think that the Occupation Army would execute the Emperor?

A: (Grandfather and Grandmother) We didn’t think so. We thought the American Government didn’t tend to go to extremes, so they would not be so severe.

Q: Were you shocked by the picture of the small and neatly dressed Emperor posed next to the big and relaxed posture of General MacArthur?

A: (Grandfather) I felt that the emperor had no choice but to take the picture posed this way. And I found that the picture showed the Emperor’s determination to save Japan.

Q: What is the most important aspect of life?

A: (Grandfather) First, it is health. Next, you must have a good partner. A woman is the power source of a man, I think. A man’s life is based on a woman. And it is key to be loved by people. Friends are very important.
Enjoy your life. I think it is meaningless if you don’t enjoy your own life.
(Grandmother) Health. I always take care of my husband’s health.

Q: What was the happiest event in your life?

A: (Grandfather) It was the time when I passed a promotion exam and became a proper government employee. And, it was when the war ended.
(Grandmother) It was the time when a spinning mill that I worked for gave me “allowance for filial piety" when I was a teenager.
My salary at the mill was one yen per day, so I earned 30yen per month. (I took only one day off per month) But I paid 18yen per month for medicine that my father needed.
One day, an employer called me suddenly and asked me how much I paid for my father’s illness. "I receive enough salary", I said, but he raised my pay to 50yen per month as "allowance for filial piety" starting the next month.

Q: What is the sad or sorry events of your life?

A: (Grandfather) When I was transferred to a rural station because of my boss felt me as insolent at my newcomer age.
(Grandmother) I cannot remember any sad events.

Q: What are events that you were surprised especially?

A: (Grandfather) I had no events that I can remember soon.
(Grandmother) I was anxious about my husband’s surgical operation (It succeeded)

Q: In your opinion, what is the key that you can maintain happy married life?

Q: What do you think you should have done?

A: (Grandfather) I am satisfied with my own life. Especially I feel lucky because I spend my business period that was substantial.
(Grandmother) I should have taken practice to write sentences formally. 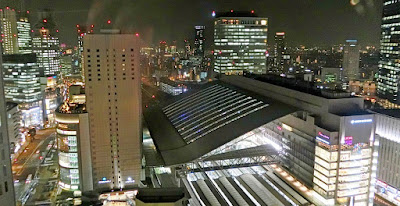